To keep costs down, the railway was built to a narrow gauge (3 feet, or 914mm). This meant that everything – passengers, parcels, freight – even locomotive coal – had to be laboriously transhipped from the rolling stock on the Great Eastern Railway’s Stephenson Gauge (4ft. 8½ ins., 1435mm) onto the Halesworth to Southwold Railway’s much smaller stock – and, of course, vice versa.

At Halesworth Station a shed and extended platform was therefore provided, with standard gauge track on one side, and narrow gauge on the other: all freight was man-handled across here by two full-time staff. Passengers could transfer via the footbridge, which led from the narrow gauge station to platforms one and two on the GER. This costly and time-consuming system was retained for the entire 50-year life of the line, despite the various attempts to re-gauge the Halesworth to Southwold Railway, which ultimately could never be afforded. Similar transfers could be seen at Minffordd (on the Festiniog Railway), and Welshpool (on the Welshpool and Llanfair Light Railway).

The disadvantages were not as bad as might seem today, as staff costs were low, and people were used to transferring from the main line to a branch line service – for example at Saxmundham (for Aldeburgh), Ipswich (for Felixstowe) and Wickham Market (for Framlingham), even when the gauge was the same.

The Society intends to re-create part of the trans-shipment shed and sidings on a new site, to demonstrate this important part of railway history. 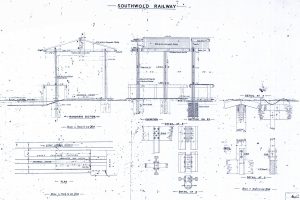 Plan of the Trans-Shipment Shed 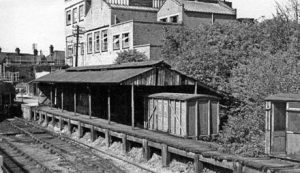 The Trans-Shipment Shed in the 1940s